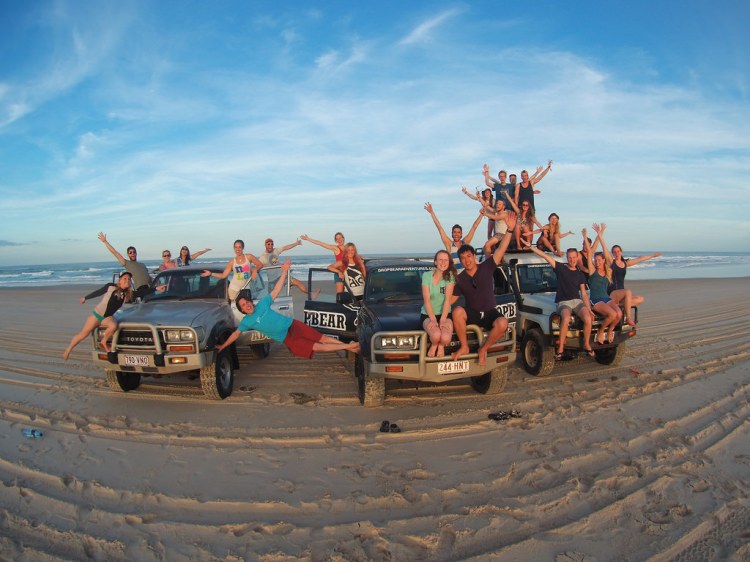 As part of our East Coast Adventuring from Sydney to Cairns, my sister and I planned a 3-day/2-night beach camping trip on Fraser Island. We joined a crew of 21 others and our Drop Bear Adventures tour guide for a getaway on the world’s largest sand island. While many know this east coast island as Fraser Island, the Butchulla people’s traditional name is “K’gari” meaning “paradise”, and after our beautiful visit, I can’t think of a more appropriate name.
Our tour was a tag-along tour with 3 separate 4wd land cruisers to drive across the sandy terrain. After watching a safety briefing video and admitting to being over the age of 21, we were cleared for driving. Our group took turns at the wheel with everyone having the opportunity to drive along both the beach and in-land tracks throughout the island. The sandy “highways” made driving on the wrong side of the road significantly more fun, especially since my first experience with driving in Oz involved a lot of mirror checking and lane drifting. Windows down, music up, and a cool ocean breeze blowing through my hair — feels like paradise already!

Accessible via a short barge ride across In-Skip Point, we jumped back in our cars to begin our journey along the eastern coast and 75-mile beach to our camp. Much to my surprise, and unlike my Outback camping experience, our camp is fully set up for us upon arrival thanks to our Drop Bear camp site team. An echidna is also there to greet us (love them!) and, after a short welcome, we enjoy lunch before heading to our afternoon destination.
Protected by sand dunes, Lake Boomanjin is the world’s largest perched lake. A freshwater lake filled only by rain water, Lake Boomanjin is deep red in color due to the mineral-rich tea trees surrounding the lake. The lake was used as a place of healing by the Butchulla people, with many spending the day soaking in the refreshing waters. The tea tree leaves smell like eucalyptus and can be brewed into a delicious drinking tea. Our group spent much of the afternoon swimming in the tea-colored water and relaxing along the lake’s edge. 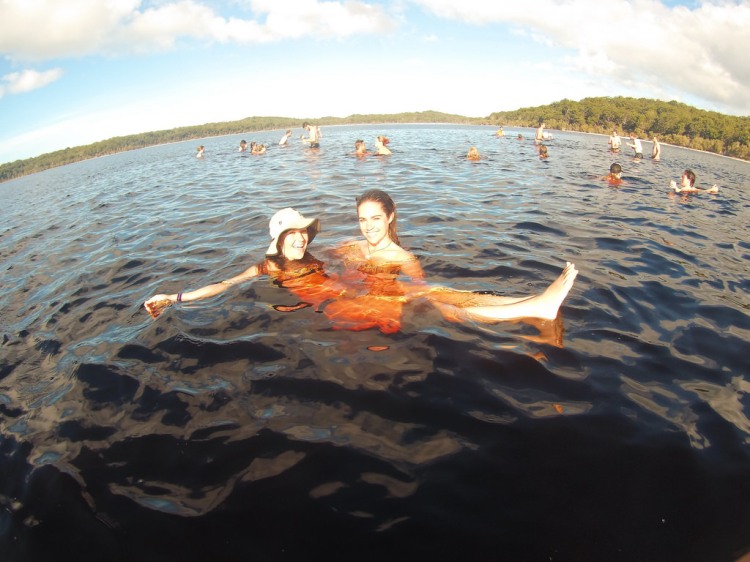 We encountered several animals over our 3-day adventure and, shortly after our echidna camp greeting, we came across two separate dingoes trotting along the ocean-side sand highway. These wild dogs look adorable and friendly but, with warning signs posted throughout the entire island and a bucket of “dingo sticks” set up at our camp’s edge, our group is thoroughly aware of the real dangers these animals can pose. Dingoes are scavengers and have been known to herd their prey into the rough ocean water, pushing them further back into the surf until they drown and wash back up on shore. Not so cute now, are they? I happily admired them from inside the safety of our cars.

Dingo
The first evening is spent with island stories of the Butchulla people’s culture, the three rules which govern the island – 1. What’s good for K’gari comes first; 2. Do not take what doesn’t belong to you; 3. If you have plenty, you must share – and the disgraceful treatment of these people by the European settlers. Our guide also shares the mysterious story of the Drop Bear, a cross-breeding gone wrong. After dinner our group heads over the camp sand dune to the beach for star gazing. The Milky Way, Saturn and Jupiter shine brightly overhead.

We’re up at sunrise on day two for the stunning colors burning across the early morning sky. Brilliant reds quickly turn to pinks and pastels as the sun nears the horizon. Our guide demonstrates how to throw a boomerang as we gaze in awe of the morning light. 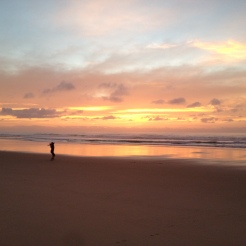 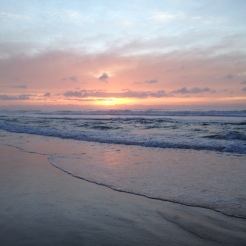 Day two is filled with long drives up and back down the coast of 75 Mile Beach to the Champagne Pools, Indian Head, and Eli Creek. Never passing up the opportunity to introduce us to the locals, our guide stops us for clam digging and jellyfish discoveries along the way.

Jellyfish
The Champagne Pools are pools of water surrounded by rocks which serve as a barrier to the crashing ocean waves. The ocean water around Fraser is full of dangerous rip currents and massive swells so the pools are the only safe place to swim in the ocean.

Our next adventure stop is Indian Head, where a rocky hillside climb brings you to perfect views of the eastern coast. This site is sacred though as it is a mass grave for many of the Butchulla people. When the early European settlers landed on the island, they viewed the natives as savage and wrote books about their encounters, often including fabricated tales of brutality at the hand of the Butchulla. As the Australian government caught wind of these tall tales, they ordered soldiers to round up all of the Butchulla people and remove them. The majority of the tribe was caught, marched up to the top of Indian Head, and pushed over the cliff to their deaths. Upon hearing this, our group asked why people were even allowed to visit this site today and were reminded of the importance of remembering. A sobering moment among all the beautiful views.

After lunch we visited the Maheno Shipwreck. Built in Scotland, the ship was originally designed as a hospital in WW1. After the war, it was purchased by Australia to shuttle passengers between New Zealand and Australia. Years later and significantly worse for wear, the Japanese purchased the ship to use it for parts but the ship was not ready to leave Australia. During the journey, an unexpected cyclone hit near the coast of Fraser and washed the ship ashore. After several attempts, the Japanese were unable to move the ship and left it in its final resting place on the island.

Our second to last stop is Eli Creek, a natural spring water with a strong current running through the island. Many visitors bring inner tubes but you can just as easily float down the creek yourself. Our final stop of the day followed a drive through Pyungun Valley to Lake Garawongera. This is a quick stop before returning to camp. The tides were creeping further up the beach and we needed to be back at camp before dark. No star gazing tonight because of the heavy cloud coverage; we watched the bioluminescent light up the waves as they crashed onto the beach.

Our final morning starts with half the group opting to take a 10-minute scenic flight around the island. Unfortunately, I am not one of them as my fear of flying keeps me grounded. My sister decides to go however, and captures some incredible aerial views including sharks attacking a stingray out in the ocean.

We cruise over to Lake Mckenzie, a natural fresh water lake for a morning swim. The water is clear along the shoreline and changes colors the deeper it gets, flowing from a bright baby blue into a dark deep blue. The lake is elevated and surrounded by dunes, filled only by rain water and fresh enough to drink. Our last stop of the tour is Central Station, originally used as a logging station until 1992 when it became a World Heritage park. 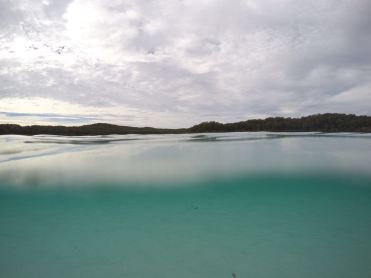 K’gari (Fraser Island) is the world’s largest sand island filled with the natural beauty of rain forests, lakes, cliffs, natural pools, beaches and sand dunes. It is one of the best tours I’ve done in Australia and am grateful for Drop Bear Adventures’ planning and guiding through such a special place.

3 thoughts on “Dingoes and Drop Bears on Fraser Island”