My trip to Tasmania was booked before I even stepped foot in Australia.  I’d been following several stunning Tasmanian Instagram accounts and reading about the natural beauty and terrific food movement in the island state long enough to know that I would be visiting.  Without knowing much about actually traveling through Tassie, I booked a 6-day adventure from Sydney to Launceston and decided to sort out the details later.  And now, as my brief #TassieTrip is winding down, I am realizing I should have stayed longer (and rented a car!).

Although my time in Tassie has flown by, I packed my days full of activities.  With all that I’ve seen and done in Tasmania, I’ve chosen to break up my chronicling into three posts: Launceston & Hobart, Cradle Mountain, and Wineglass Bay.  Three of my six days were planned via Tours Tasmania, a tour company which offers day trips as well as a combined three day tour to The a Big 3 (Cradle, Wineglass, Port Arthur).  I booked the Big 3 for $360 AUD in total and experienced three very different days as well as viewed much of the state while en route to and from our destinations.  It is a decision I will easily recommend to a fellow traveler, particularly one traveling solo like myself, as it is expensive to rent a car in Tasmania.

Tasmania is a truly beautiful state with much to offer.  Although it makes up only about 2% of Australia’s landmass, Tassie’s ideal farming lands, unique plant and animal life, and varying geographical features are much more significant.  For starters, Tassie contributes about 50% of Australia’s mountain ranges and, with large opium farms, accounts for 48% of the world’s medicine production.

Tasmania is mostly rural, with over half of the state’s population living in the two major cities of Hobart and Launceston.  Driving through Tasmania provides beautiful views of its rolling hills, green acres filled with sheep, cows and horses grazing freely, and the occasional road sign for kangaroos and the iconic Tasmanian devils.

My travels led me through numerous small towns filled with dull-colored homes to blend in with their natural surroundings, and populations ranging from 400-1,000.  These smaller towns are also trying to catch the eye of the 1 million annual visitors each year with potential draws such as town mural competitions and topiary collections.  It’s difficult to compete with all the natural beauty of Tasmania but they’re trying.

Australia’s oldest bridge, located in Richmond and erected in 1823

Australia’s third oldest city, Launceston lies along the Tamar River in the north-central part of the state.  Launceston is a quiet port city with a few big draws: Cataract Gorge, Boags Brewery, and the beginning of the Tamar Valley wine region.

Located along the Tamar River, just north of Launceston, is the Tamar Valley Wine Region, a top destination on my Tassie bucket list.  I booked a half day tour to visit five of the boutique vineyards and sample their dry, cool climate wines at the cellar doors.  One of the things I love about wine tasting in Oz is that the vineyards are very generous with their tastings.  If a vineyard produces 15 types of red and white wines, you can try all 15 wines! Pacing is important in this setting!

Pinot Noir is the most popular wine of Tamar region, with Pinot Gris becoming increasingly popular as well.  The vineyards produce everything from Chardonnay to Cabs and Merlot, with many also offering dessert wines and ciders as well.  Each vineyard featured beautiful valley views as well as selections of local cheeses and fudge.

Australia’s second oldest city, Hobart is a seafood mecca with their harbor serving as the main focal point for the port city, the harbor with Mt Wellington as its glorious backdrop that is. Hobart is a bit more hip and lively compared to Launceston and serves as the gateway to many of the top tourist attractions including Wineglass Bay, Port Arthur, Richmond, and Bruny Island. I spent a day wandering Hobart’s streets, exploring the shops, and enjoying the fresh local ingredients featured in many of the restaurants and cafes.

Hobart’s main focal point with Mt Wellington as its backdrop

My third and final day trip was to the historical colony of Port Arthur, the penal community for Australia’s repeat offenders. While it wasn’t my favorite of the three trips, I left with a lot of questions and thoughts  swirling in my mind. Most of my bus ride back to Hobart was spent writing questions down to reflect upon later and share here.
Port Arthur is a beautiful community with colonial buildings, homes, and gardens. Perhaps the convicts did not see it the same way I did but there certainly are worse places to serve out a sentence or two.

Historians have done a great job preserving what’s left, restoring many buildings that were damaged by bush fires, and telling the individual stories of the men who served time there.  Upon entry, you are handed a playing card which represents a particular convict. Visitors are instructed to use the card to find your way through an exhibit, unlocking the story of your convict and learning of their crimes, punishment, and sentence.  I appreciated this “game” as it gave you a person to connect with, making their story come alive rather than only learning a few general and basic facts about life in Port Arthur.

Although only open from the 1830s to the 1870s, Port Arthur was significant for many reasons.  One of which was the lasting contribution the convicts made in Australia, building everything from ships to roads and bridges.  Port Arthur was also the first site in the world for a juvenile detention center. Boys as young as 9 could have been sentenced to time in Port Arthur.  Officials decided to separate the boys from the influential men by sending them to a separate island across the harbor.

Additionally, Port Arthur tragically experienced a mass murder in 1996 when a man went on a killing spree both at the historic site and a nearby restaurant, murdering 35 people and injuring many more.  This event was a tremendous shock to the quiet community and peaceful Tasmania as a whole. As a result, the Australian government responded by tightening their gun laws, making it difficult to obtain a gun at all.  Today Australia continues to be a country with limited gun violence, unlike my homeland…

These three things struck a chord with me and promoted my afternoon of questioning and interest in discussion.  I’m including some of my thinking below and would be interested in discussing, should any of you fellow readers be willing to engage.

I don’t expect to find all the answers but my trip did get me thinking, enough so to share here.  While these are heavy questions, they did not damper my day.  Port Arthur is well worth the visit and deserves at least a full day to appreciate and explore.

3 thoughts on “#TassieTrip: Launceston and Hobart” 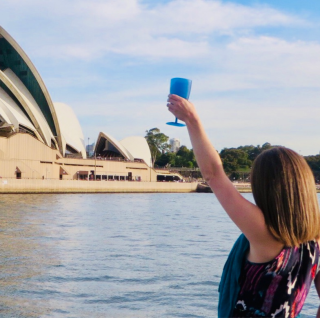